Public transport in Fuerteventura It is a very efficient and quite used, both by tourists from the people who every day go to work.

The term that is used around the world is BUS, but in the canary islands you feel that is called with the word GUAGUA.

The word guagua is a voice of onomatopoeic origin. As significance of omnibus or urban bus service has its origin in Cuba. Guagua is the result of a phonetic adaptation of the English word wagon, which means chariot. in United States They have been named as the big wagons that traveled to the west of the country, as well as medium-sized buses used today for free transport people.

The adoption of the term WAGON by the Cubans may have been produced by its phonetic similarity with the Caribbean sentence “bus”, what does it mean “in vain”. Because of the economic cost of public transport, buses have become buses or vehicles for free travel. The Canarian emigrants carried the word in their land.

But back to us, my advice useful is to try to always take the GUAGUA in Central Station, or the PARADA CENTRAL so you do not risk not find a place.

You should be normal tourists can buy the ticket directly on the bus, where the driver will issue the receipt directly.

If I can be in the N.I.E you can go directly to the office of tourism in Puerto del Rosario and you can apply for the card that will give you the opportunity to discount of approximately 60% , Also bring two photos that will be used for issuing the label.

If your use of your, both several times a day, you can apply the unique card, where you will pay 20 Euros per month and as much as you can utlizzarla.

Anyway click here to see the various offers that may be for you. Here you are the routes that you can find on the island of Fuerteventura : 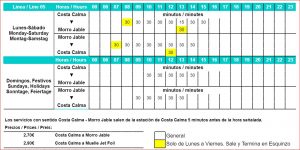 We hope that this will be of help to pass a pleasant holiday on the island of Fuerteventura . YOU WANT TO RENT YOUR CAR AT THE BEST PRICE ? DIGITA SU

Looking for your hotel best price ?

Looking for your home in the canary islands ?